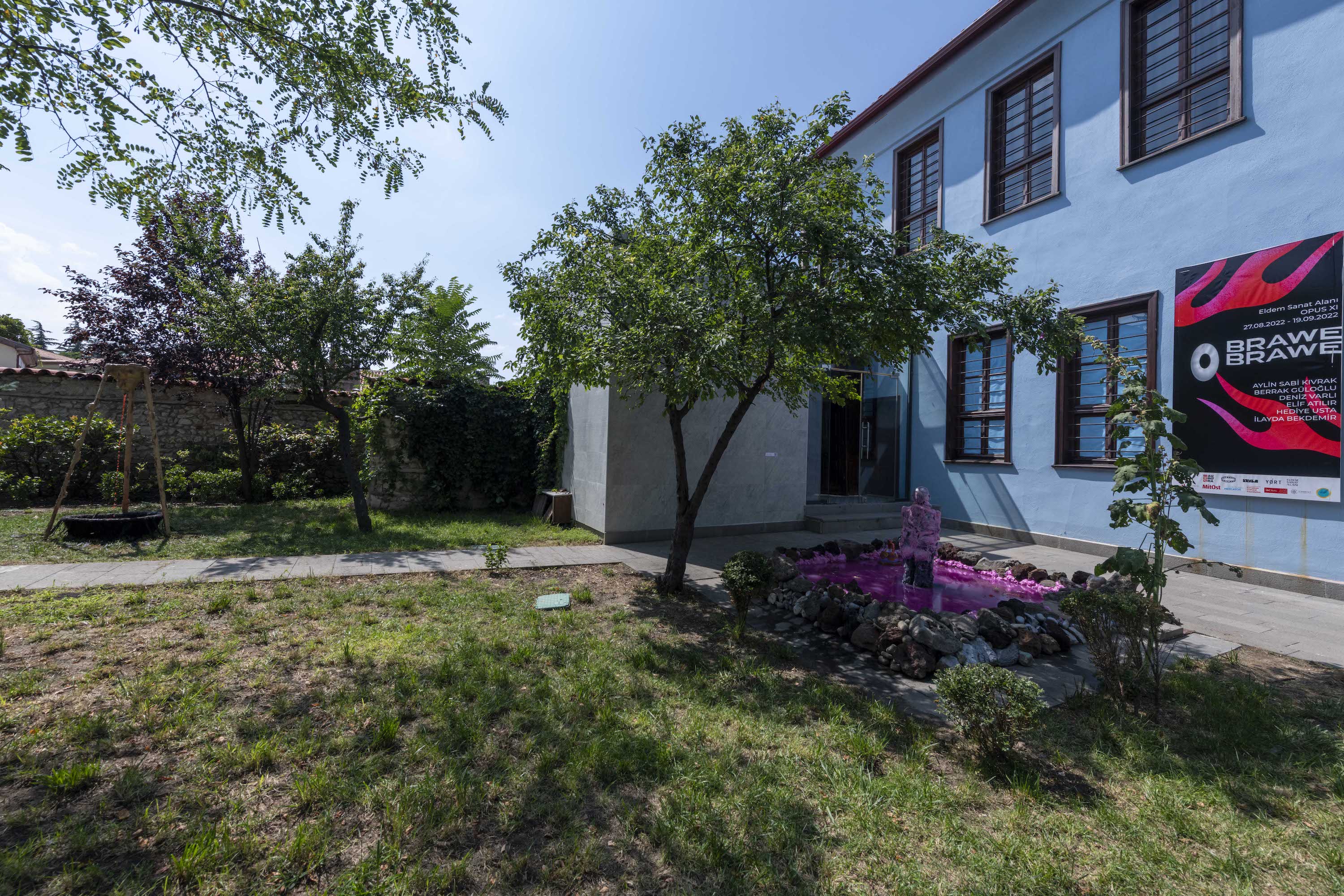 The BRAWE exhibition consisting of the interdisciplinary artworks by young female artists from Turkey is on view between 27 August and 19 September 2022 at Eldem Art Space, OPUS XI, and in public spaces around Odunpazarı in Eskişehir.
COLLABORATION OF Budapest Hub Eskişehir Hub
BRAWE is a collaborative art project of partners and participants from Turkey and Hungary. It started in February 2022 with the aim of creating employment, solidarity and safe space for female artists under the age of 25, selected via an open call. During the past seven months, the artists met each other, and together with the actors of cultural and artistic sphere they participated in the seminars, participatory programs and workshops held simultaneously in Budapest and Eskişehir. They also created special projects for the Bánkitó Festival. In the last phase of the project, the BRAWE exhibition, a collective work reveals current artistic and cultural dynamics with feminist and activist practices, theories and cultural layers, and examines the patriarchal social pressure of the contemporary world.

The participants of the BRAWE exhibition are the project’s artists from Turkey: Aylin Sabi, Berrak Güloğlu, Deniz Varlı, Elif Atılır, Elif İlayda Bekdemir and Hediye Usta. Their interdisciplinary artworks are the outcomes of the long-termed process of collective researches, workshops, production and sharing in Turkey and Hungary. The experimental, heterogeneous and collective pluralism of the artworks is a call for change and activism. After an intense program of theoretical discussions and practical experiences, the artists present their creations to their audience in the public space and in the venues of Eldem Art Space and OPUS XI.

In the face of patriarchal hegemony in the entire social space, six artists contemplate on the concepts and problematics through their works, with a call for a new feminism. As a projection of the process they went through in the project, they discuss sociological concepts such as the use of public space, gender, violence and marginalization. With the use of a wide variety of materials such as fabric, hair, tulle, clay, video, rope, mirror balls, silicone, glitter, paint, toilet paper, tile, inflatable plastic dolls, chain, etc., they explore current global socio-cultural problems. Various titles of social sciences - borders, phobia of obesity, bodily integrity, social taste, aesthetic concerns, gender equality in language, female image, abject, marginalization, ideology of equality, commodification of the female body in patriarchal capitalism, transformation and objectification of the body into an advertising element - find their artistic expressions in their works.

Aylin Sabi, Berrak Güloğlu, Deniz Varlı, Elif Atılır, Elif İlayda Bekdemir and Hediye Usta raise their voice against the awry invasion of male-dominated society through their artworks. The BRAWE exhibition is the final step of their research and practice in analytical production and discussion for intervening hegemonic signification. The artists’ activist criticism of accumulating problems of a stringent world offers a powerful, striking and harmonic narrative in the light of equality, right, justice and unity, with their installations in private and public spaces.

Culture is the accumulation of given knowledge. It contributes to order in society, and represents the comfort zone. The curtain, on the other hand, is the symbol of concepts such as veiling, limitation, being dependent on men in terms of sexual preference or sexuality, and being closed to the outside, which are socially attributed to female identity. It also stands softly in the middle of contrasts such as indoor-outdoor, safe zone-dangerous zone, and private space-public space. In this work, curtains act as thresholds and stand there as the first step of new beginnings. The installation questions the so-called safe space by employing familiar cultural discourses.

We have to create our own safe space, and if we want to change something, we must first start with the language. The installation invites you to the Threshold: How safe is your safe space? 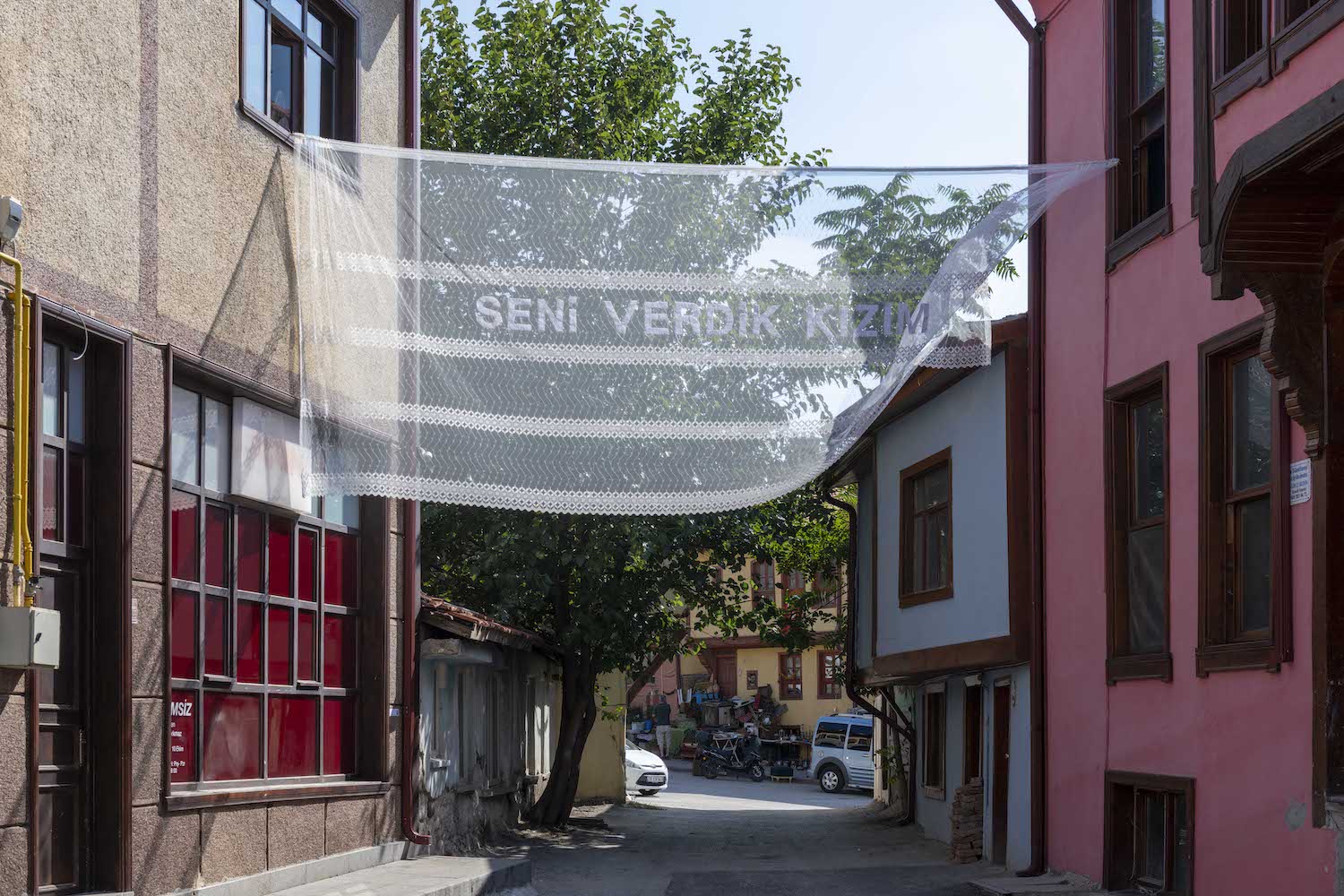 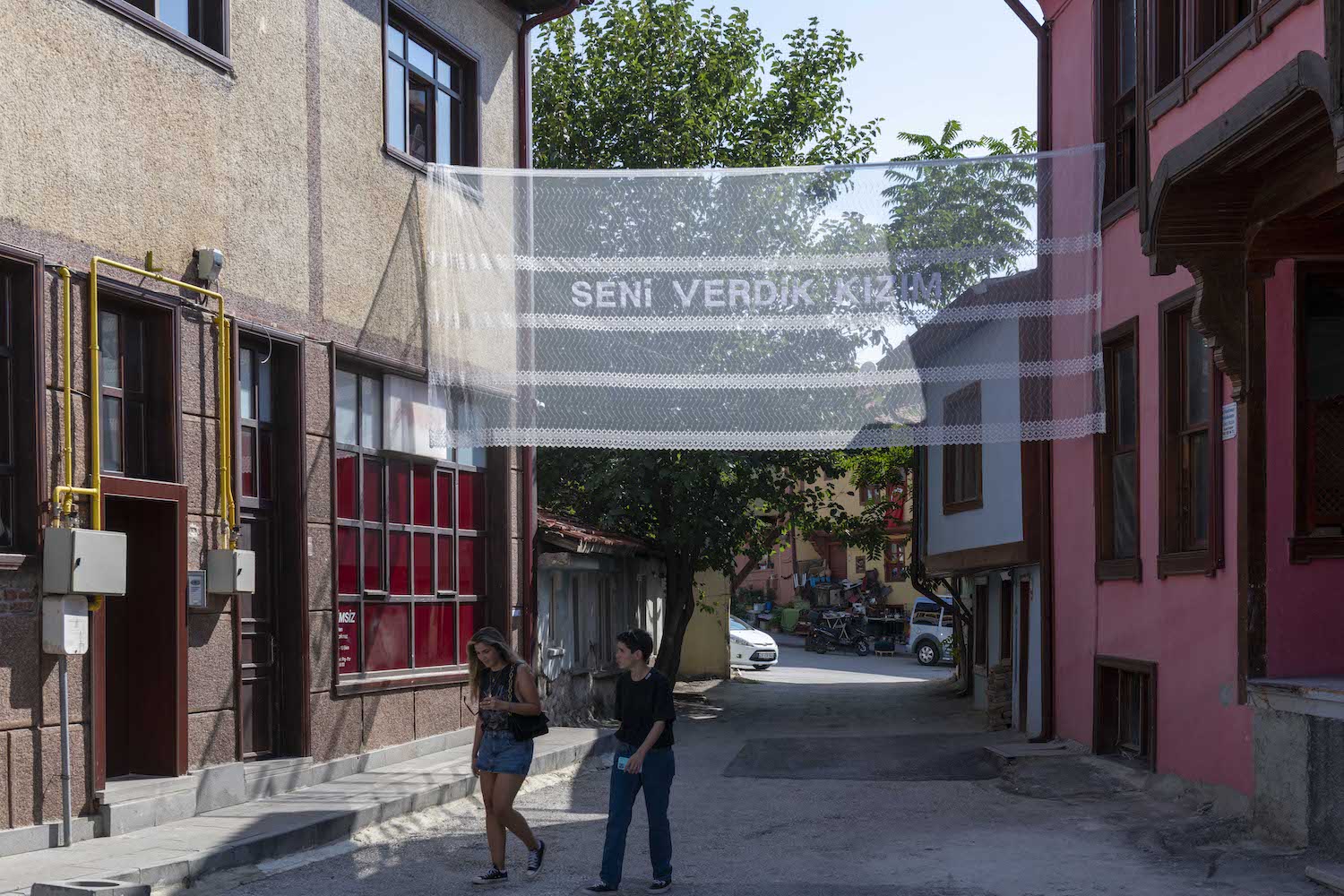 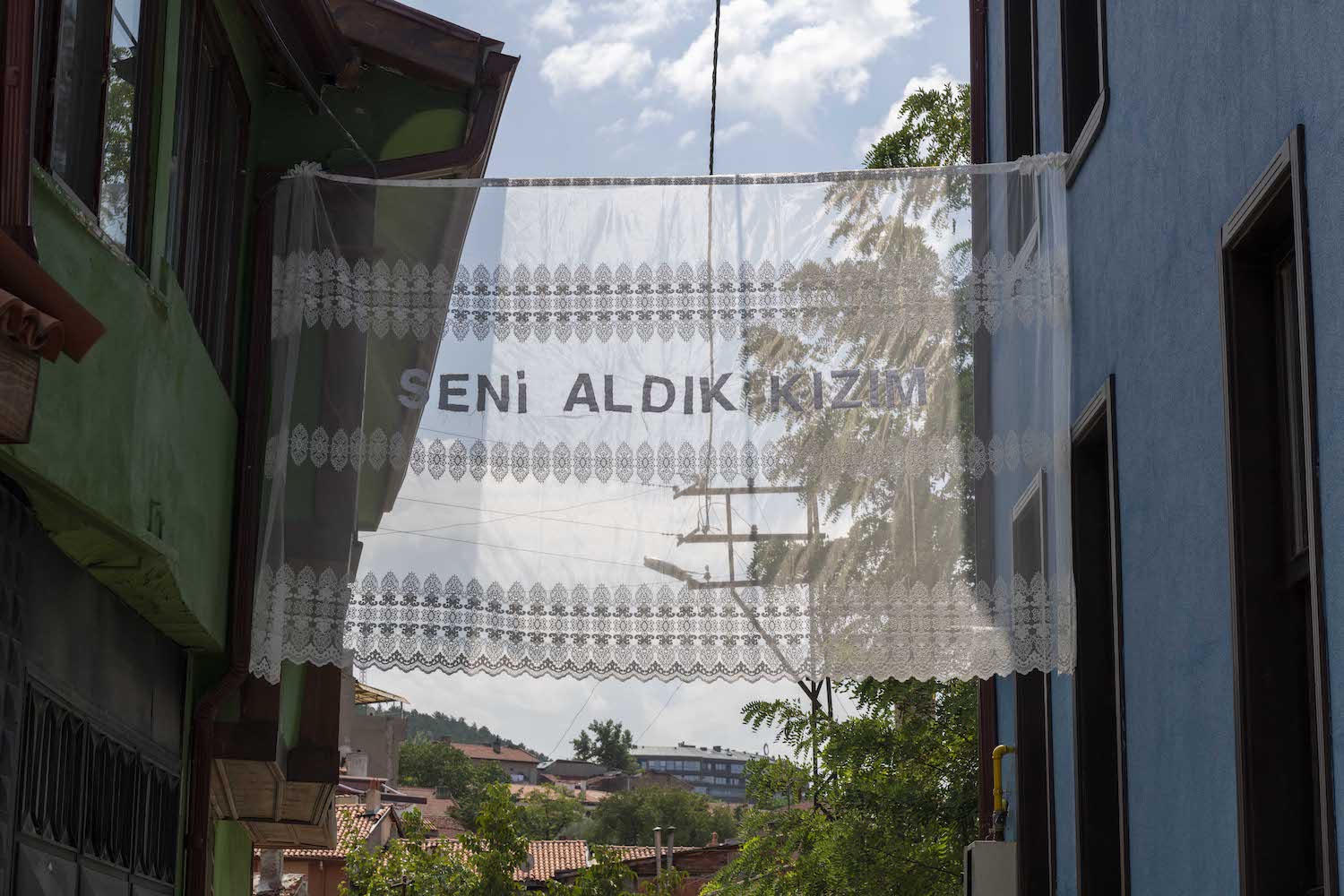 Always sexually available, customizable, silent and obedient, sex dolls represent the ultimate idealization of womanhood under patriarchy. Inflatable sex dolls, in particular, are the archetypes of the increasingly “realistic” AI driven gynoid sex robots and are the first mass produced sex dolls due to the advancement of capitalism and invention of rubber.

The artist aims to disassemble and reassemble these plastic, disposable, simulative inflatable dolls as a response to the fragmentation, objectification and caricaturization of the female body by the patriarchal/capitalist mentality and visual advertising culture. Doing so, the artist creates a representation that is metamorphosing, interchangeable, deformed, fragmented and monstrous with an attempt to reveal the marginalized, fetishized, commodified, controlled and disciplined state of and the culture around the female body. 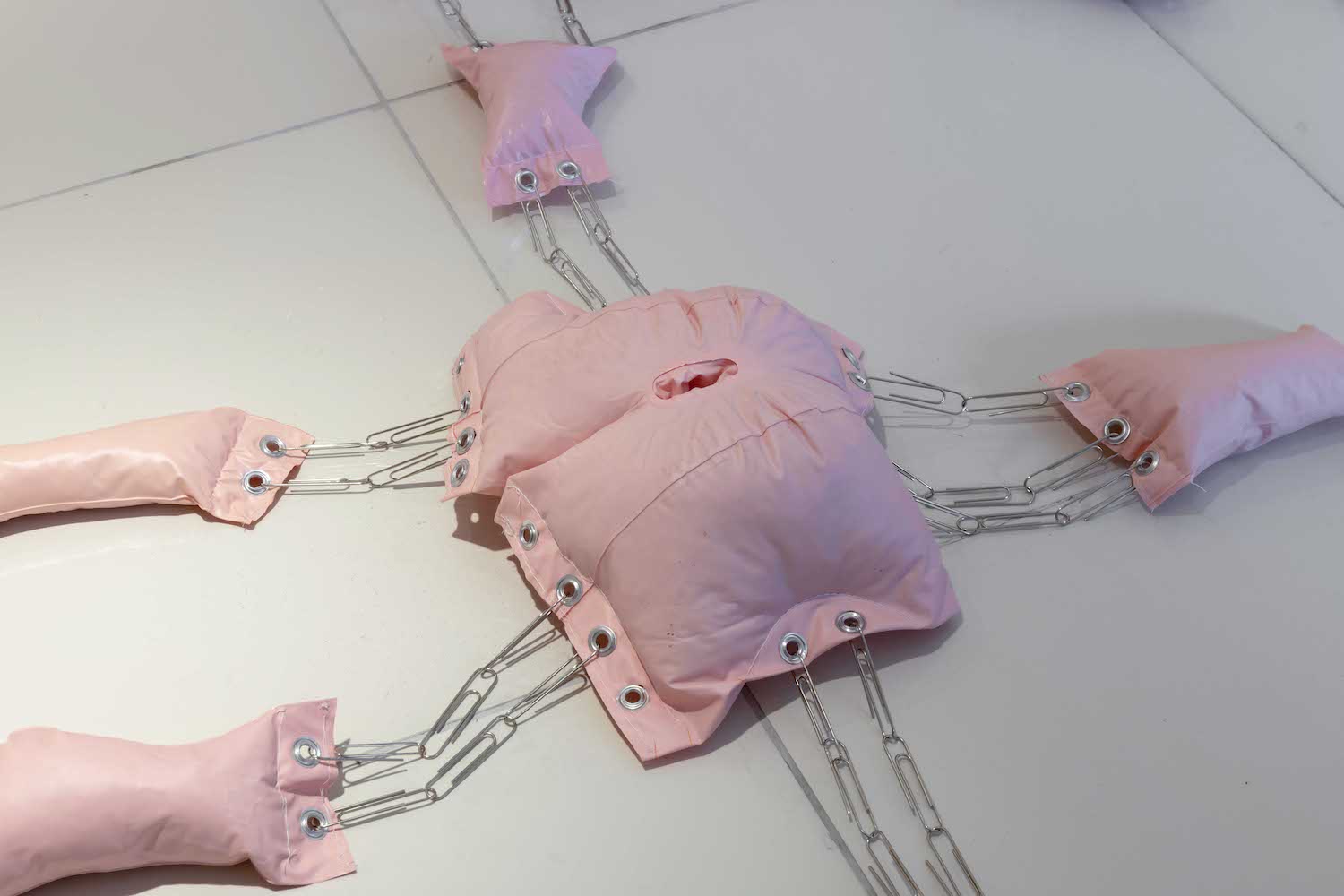 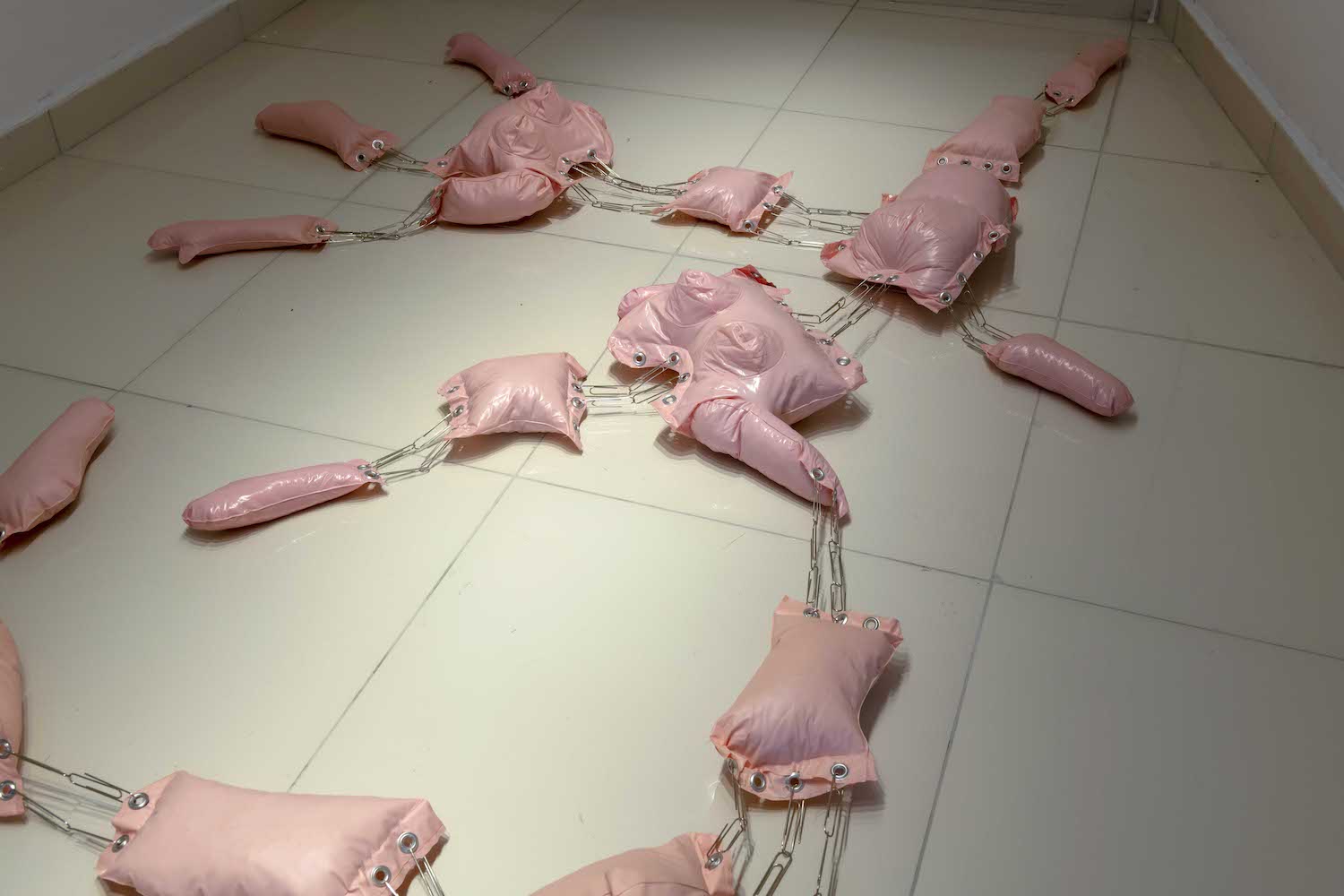 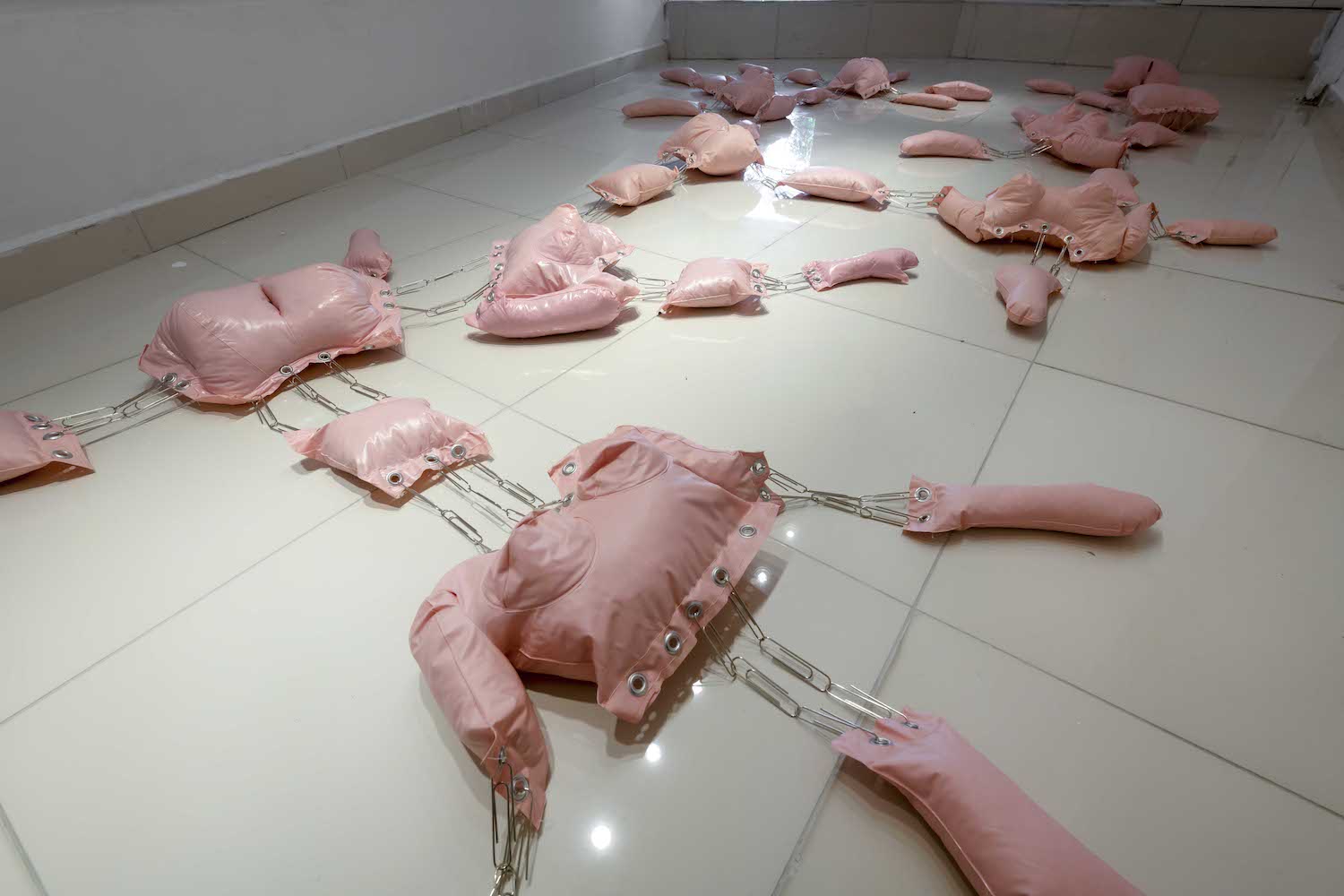 Patriarchal domination, together with many elements that shape our culture, imposes unwritten rules on our minds. Failure to adapt them would result in isolation, exclusion, violence and abuse. Individuals in the society conveys these rules as a discourse which pacifies women, and threats them with the risk of being harassed by the self acknowledged power of male dominance. These rules apply on an entire set of aspects, from the way to dress to professional life, from how to speak to gestures and mimics. Women are still struggling against those pacifying rules in order to live their life freely, express their desires, and pursue their own route.

We shared and compiled all these rules and discourses through social media, and wrote them on toilet rolls to be disposed. Toilet paper symbolizes the contradictions and senselessness in this discourse. The use, disposal and recyclability of the material reinforce the underlying concept of the installation. The interactive workshop on the site focuses on recycling toilet papers and shaping our struggle. 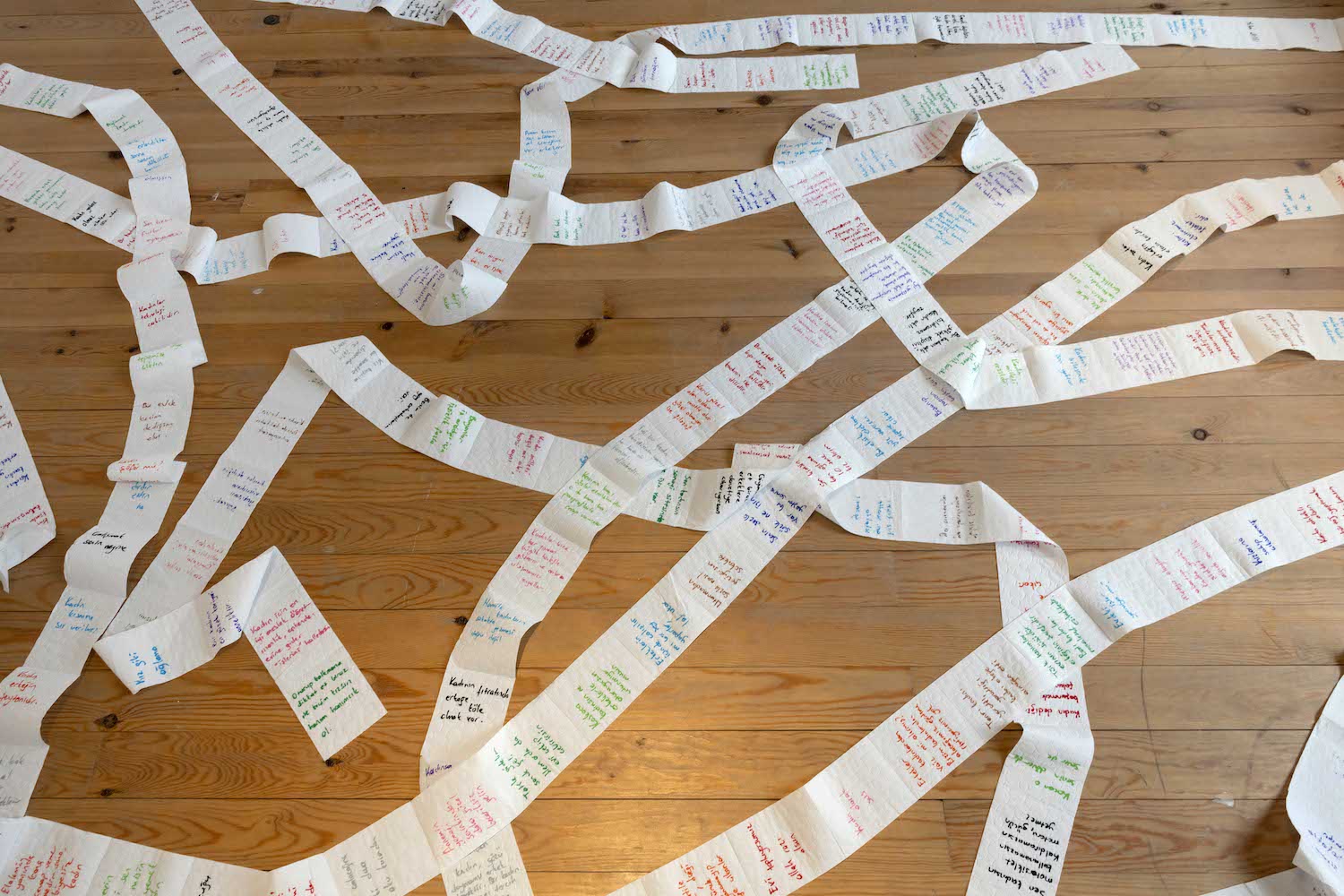 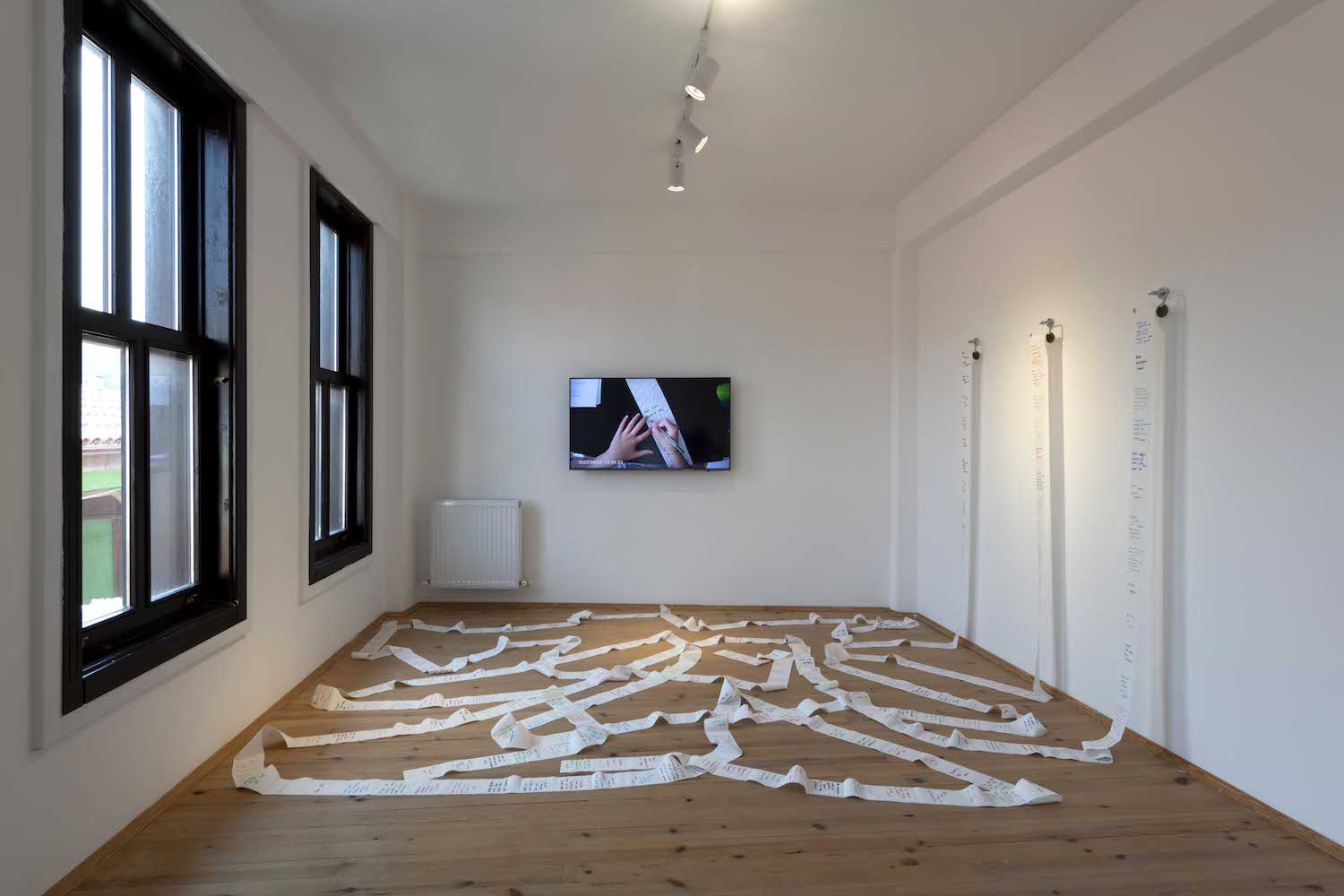 Bodies dispose some of its parts in various ways: Bleeding, sweating, crying, defecation, urination, wrenching out, etc. The disposed parts excluded from the body result in the alienation of the subject, and the subject feels threatened by the excluded material. The repulsive urge is the subject’s way to emphasize her borders, to protect herself, and to get rid of the threatening body parts.

Marginalized groups are considered to be threatening for a society, and they become subjected to repulsion. The society defecates them out of its body to exclude them, and to get rid of them. The excluded bunch’s tool for survival in a realm that cannot be positioned in the society is resistance. This installation owes its title to Agnes Varda’s 1985 movie, Vagabond [Sans Toit Ni Loi], and represents this resistance. In a bipartite structure, water is continuously excluded, and finding a way to exist in a circle. The installation refers to the excluded, who survive by their resistance. 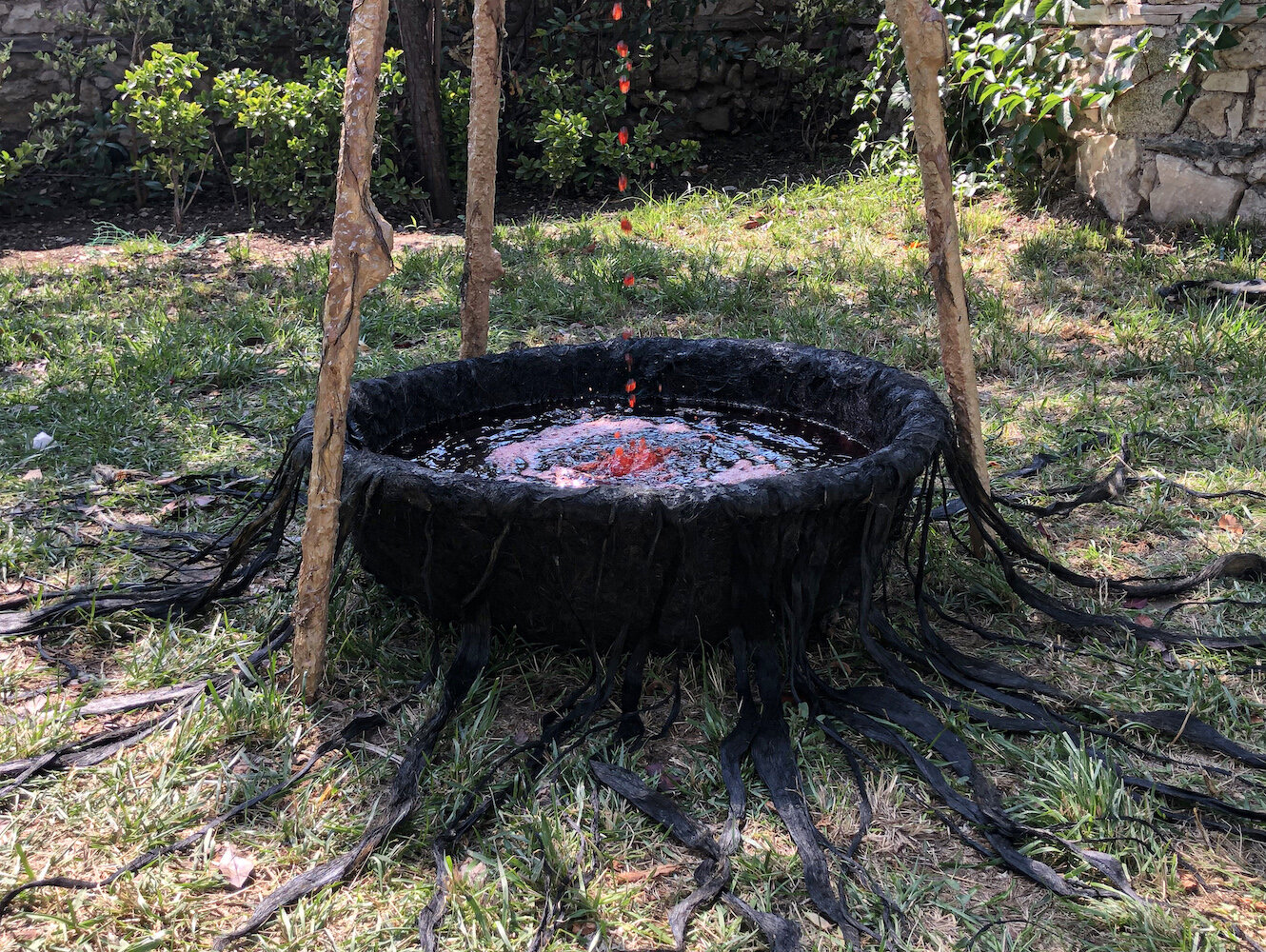 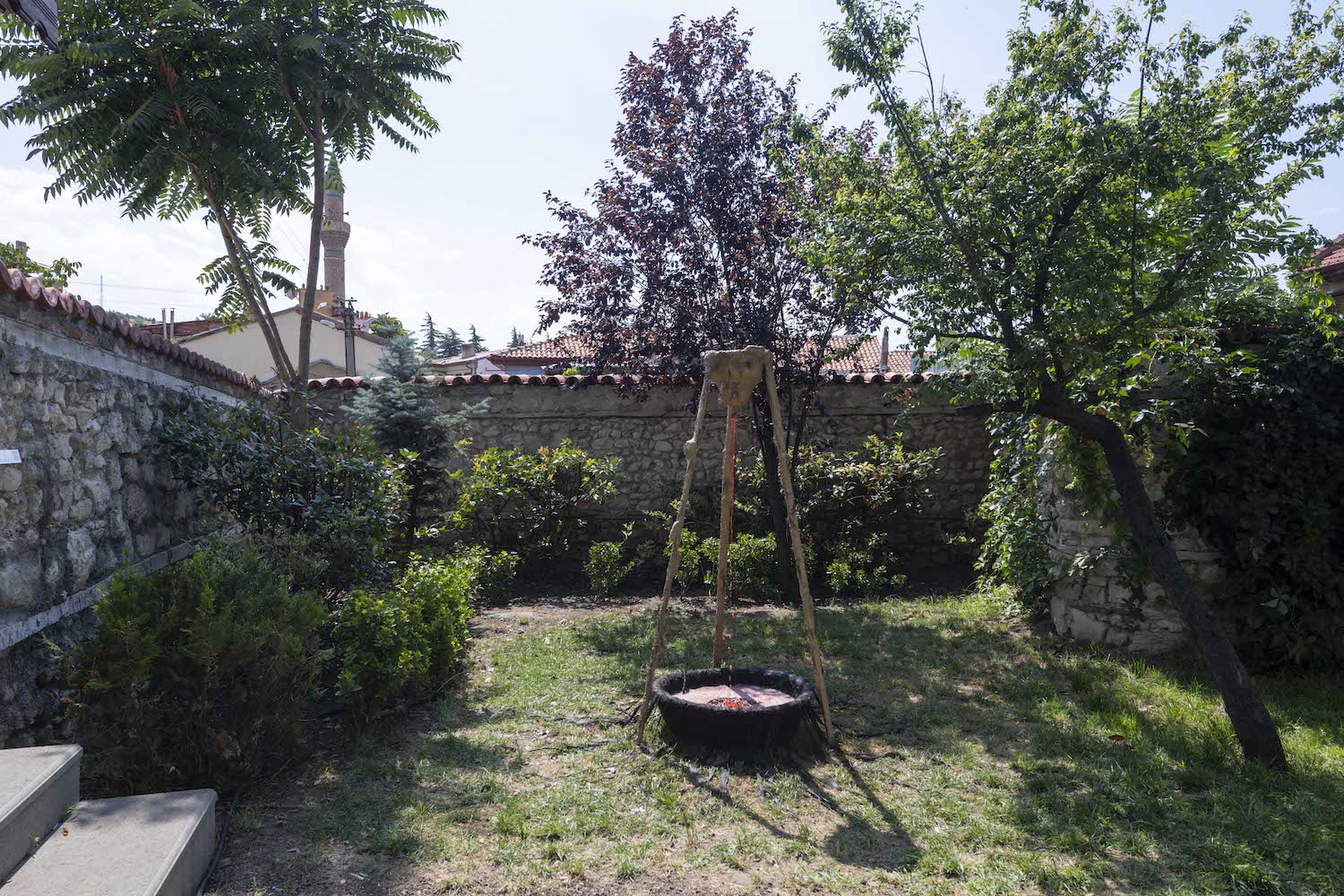 Taken its roots from racism, misogyny and ableism, fatphobia still remains as an unpopular issue in Turkey unlike the rest of the world. With this installation, the artist aims to attract attention for social stigma of obesity by exposing this sculpture of a disabled PoC female body subject to fatphobia (which is marginalized by society and mainstream media) to the audience’s gaze.

Moreover, while filling the pool with vibrant pink water and glitter creates an image of a swamp that is shaped with negative body image perception and beauty standarts, the body sculpture in the center declines all impositions and wants to be her-actual-self, feel safe and happy in her body by climbing out of the swamp. 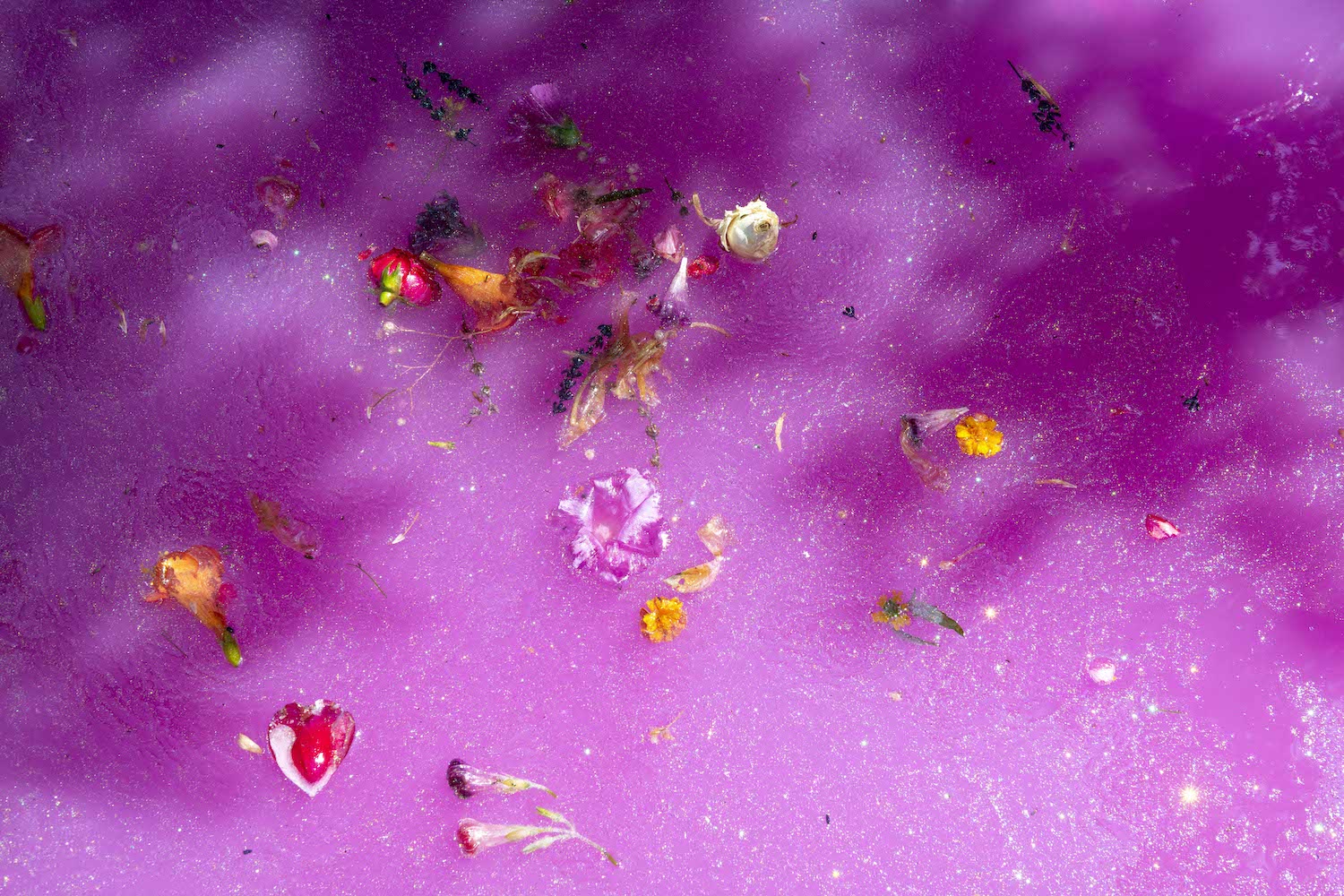 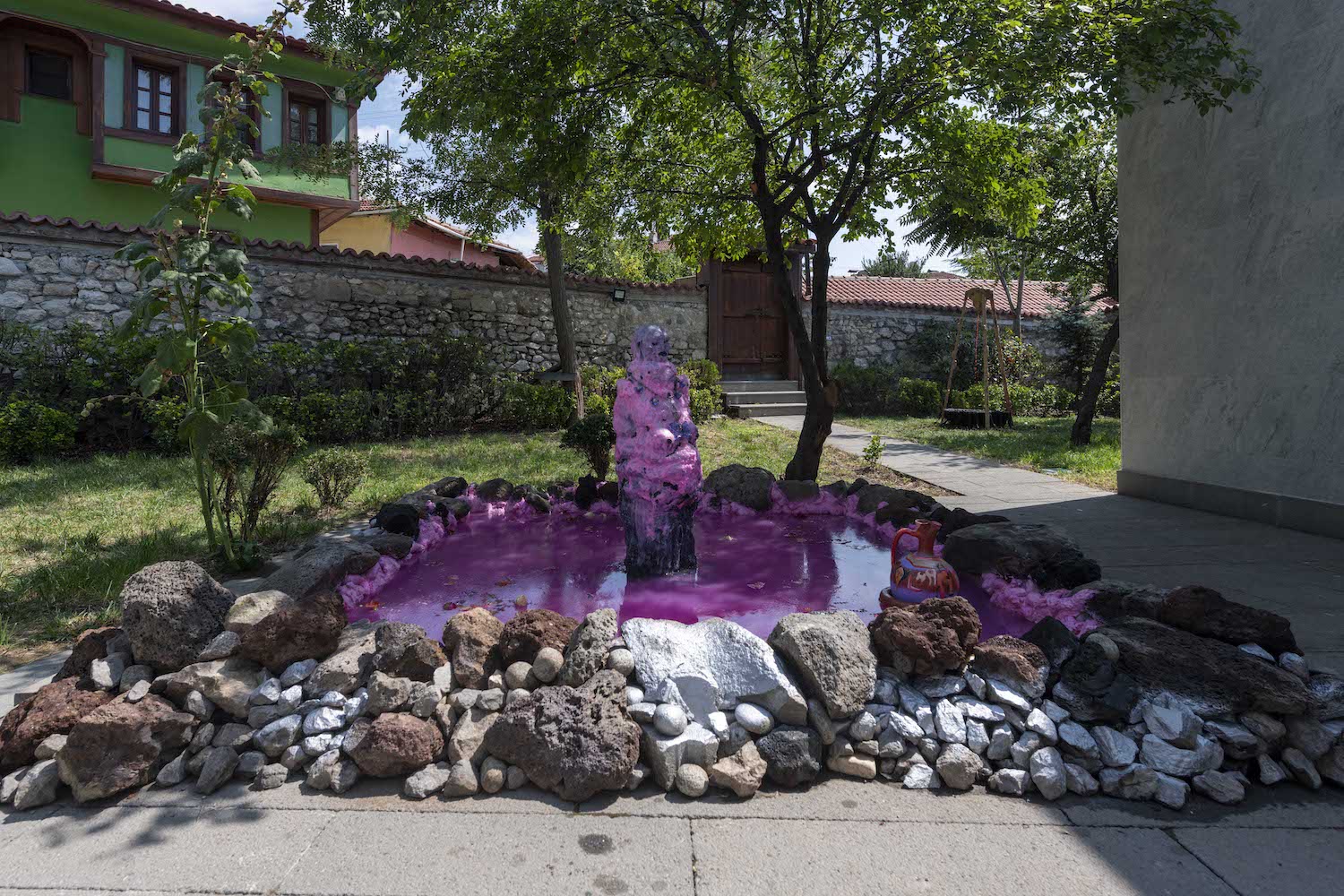 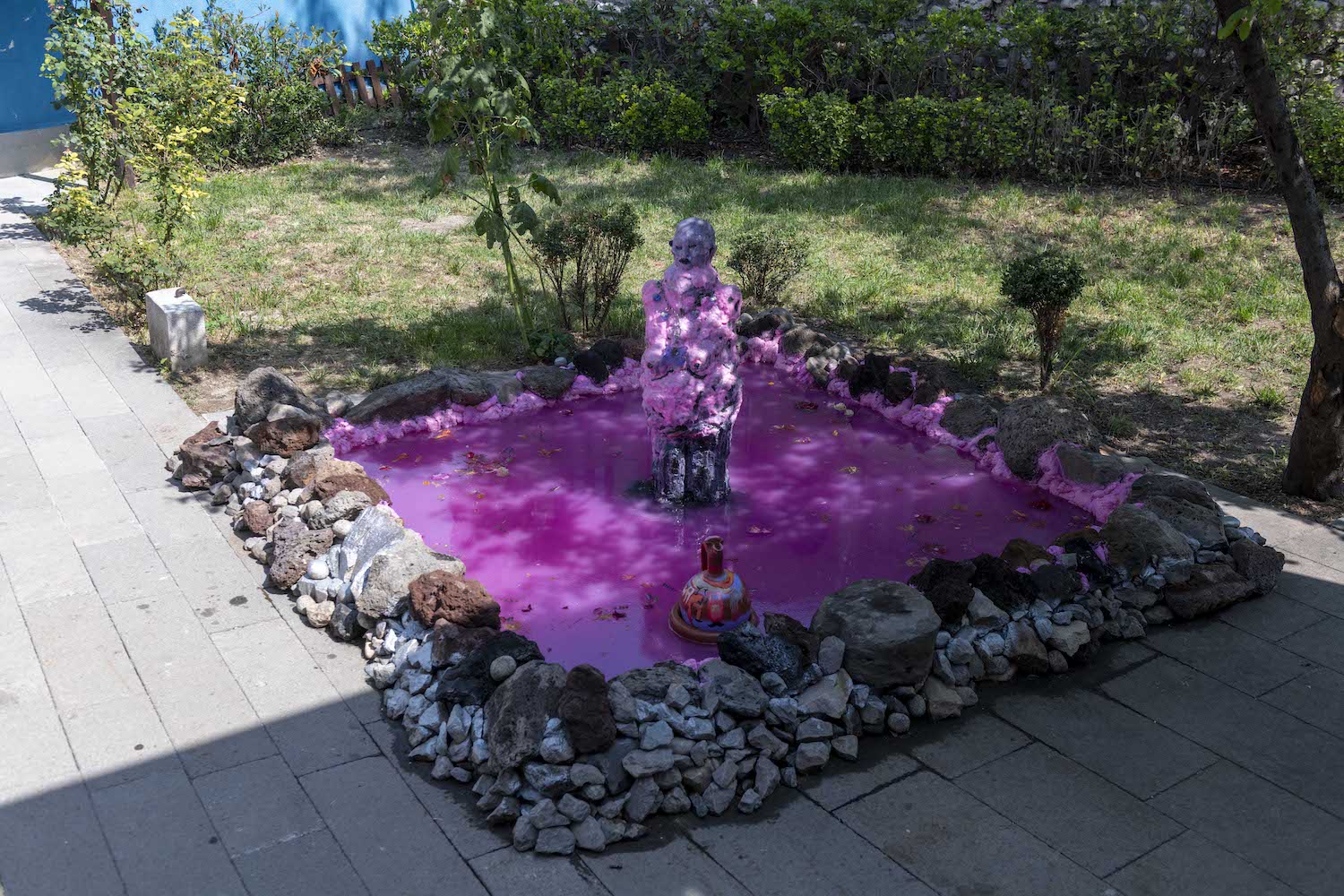 All living things in nature struggle to survive in some way. Some factors hold this action up, or reduce its effects. Ulus Baker explains this idea with the concepts of “conatus” and “potestas”. “Marginalized" groups or the ones considered as “minorities” feel this conflict more, and they have to invest more in struggling with these factors. “You're Not Home Anymore!” is an installation that visually explores this struggle.

The title of the installation refers to the social oppression on women, which assumes “who is at home is supposed to stay at home.” Home is the private realm. Its habitants should stay in, since their existence out would cause a riot. Another implication of the title is the denial of previous stages of life in a hypocrite discourse: When a kid starts school, she is told that she is not home anymore; when a boy joins the army, he is told that he is not at school anymore. 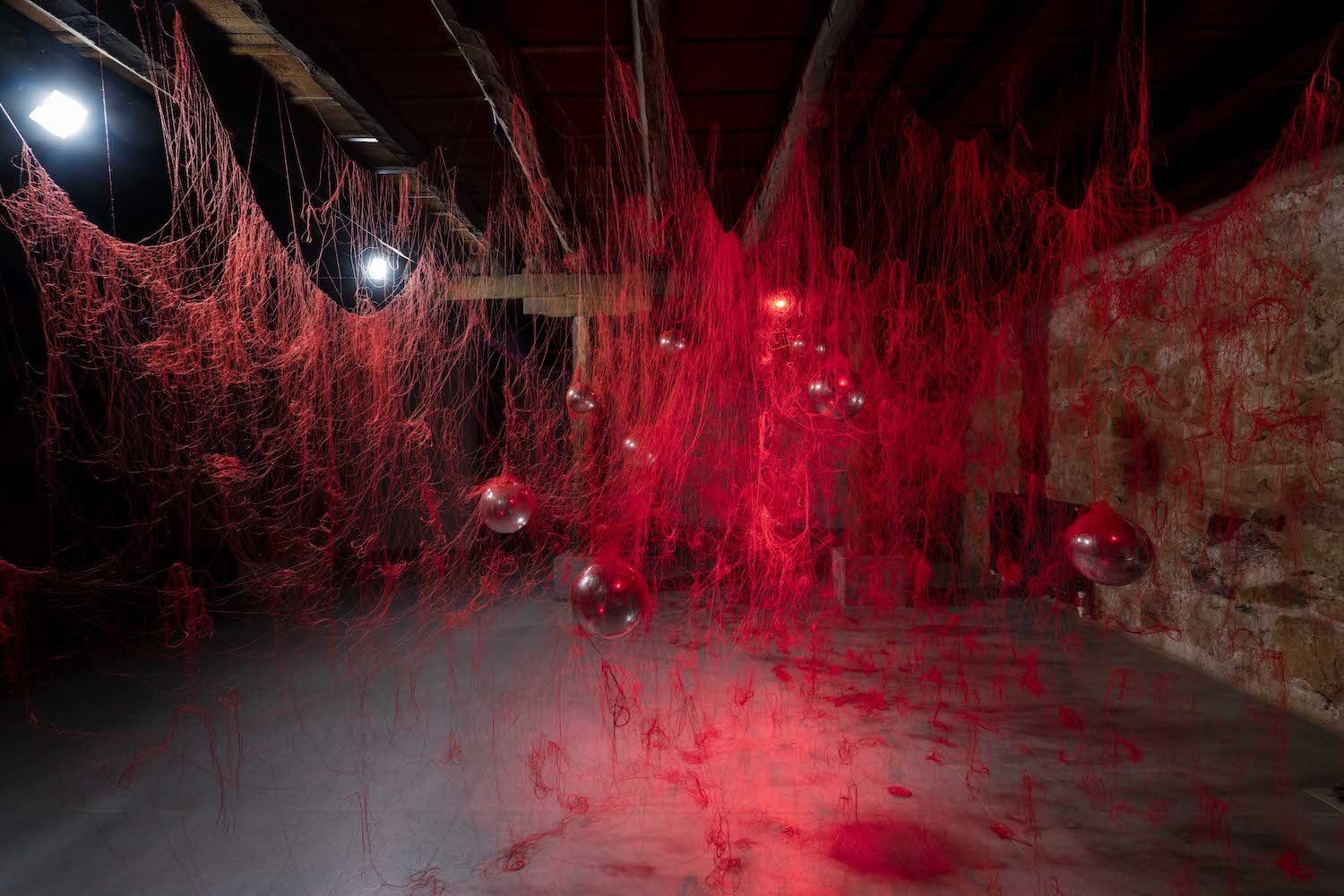 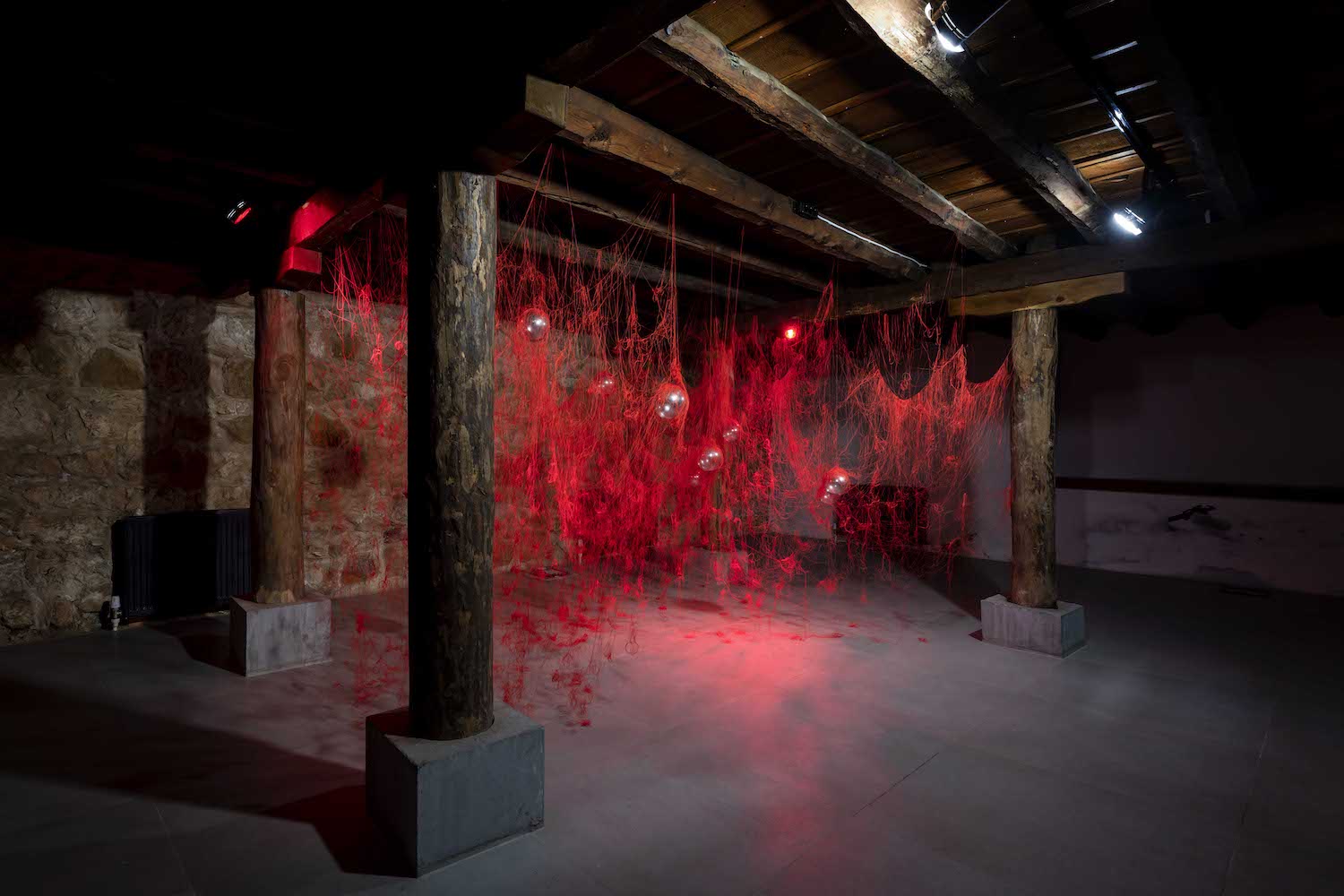 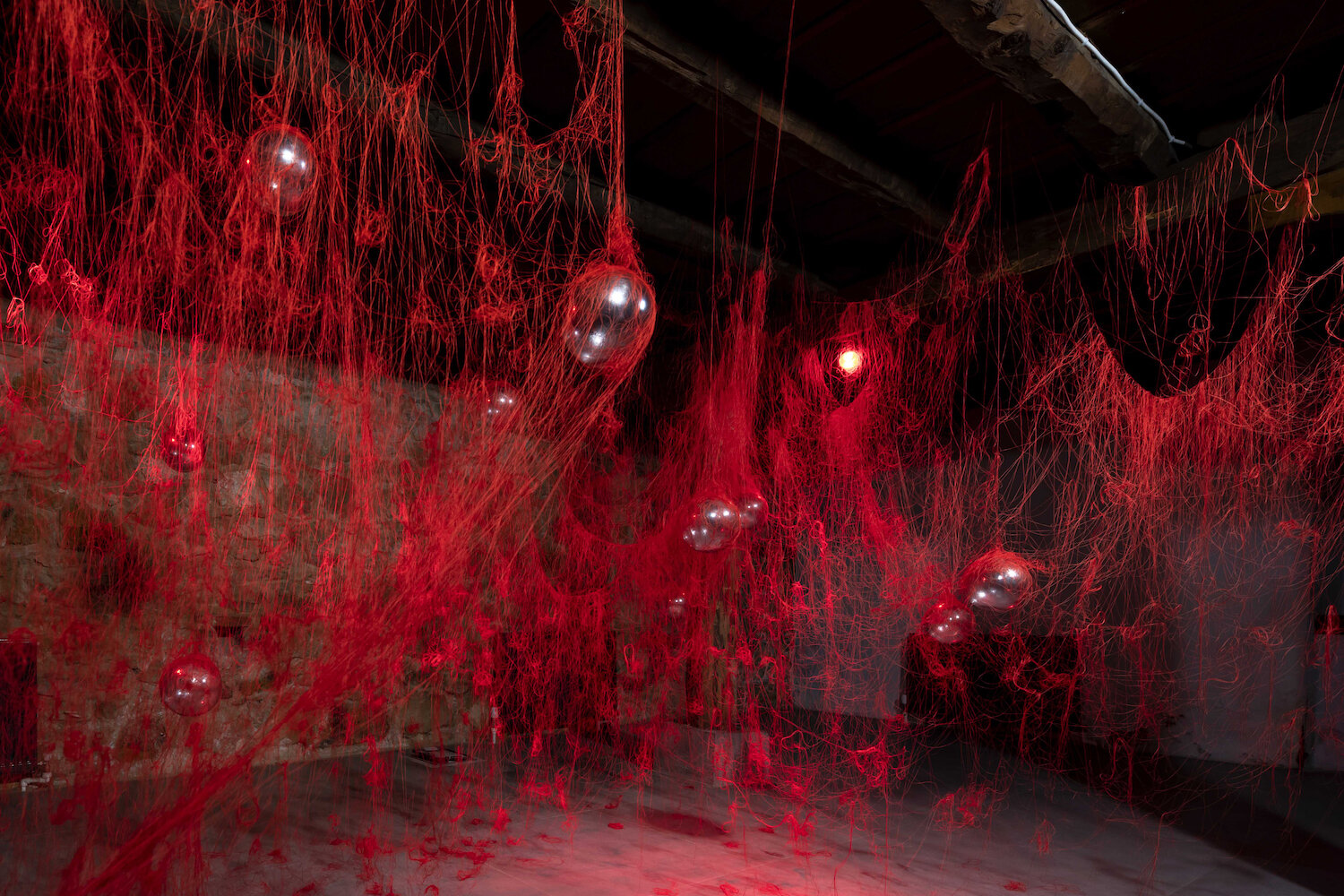 The installation transfer a private space, i.e. the bathroom, into a public one, a derelict area used as a parking lot by the neighbors. Far from being in a space for any spectacles, the installation invites the audience to leave their comfort zone, and experience the alienating effect under the gaze of an individual (a most legitimate public representation of an individual, i.e. a passport photo) surrounded by the unwanted abject elements of the private realm. This surreal and dysfunctional space exposes its viewers to the experience of those who are unwanted in the society and therefore alienated from the society, and those who try to be desired in the society and become alienated from themselves.

The person in the passport photos, the subject of all this chaos in the bathroom, in her own simulative reality, is preparing to flush the toilet, and get out in five minutes in a well-prepared way. 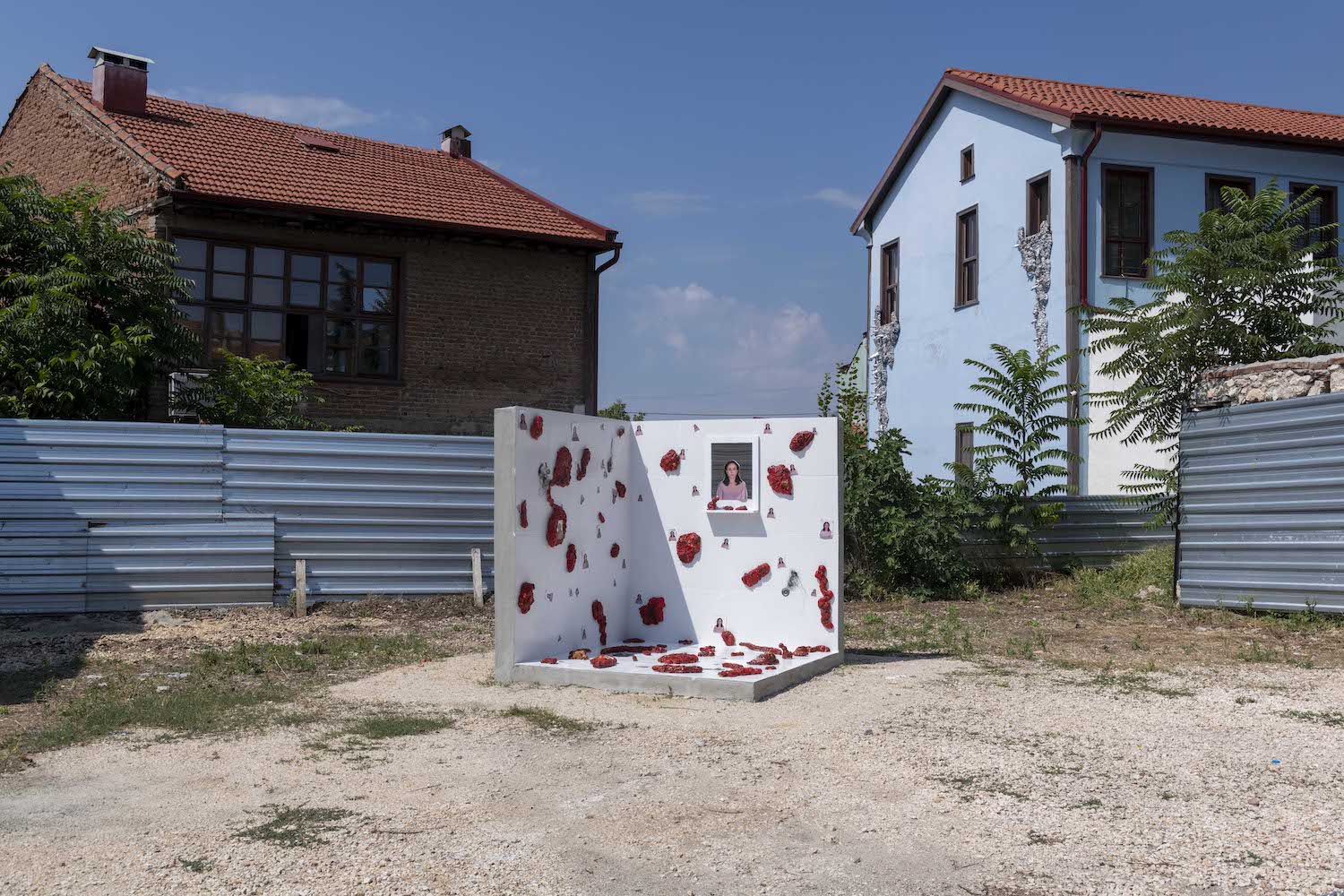 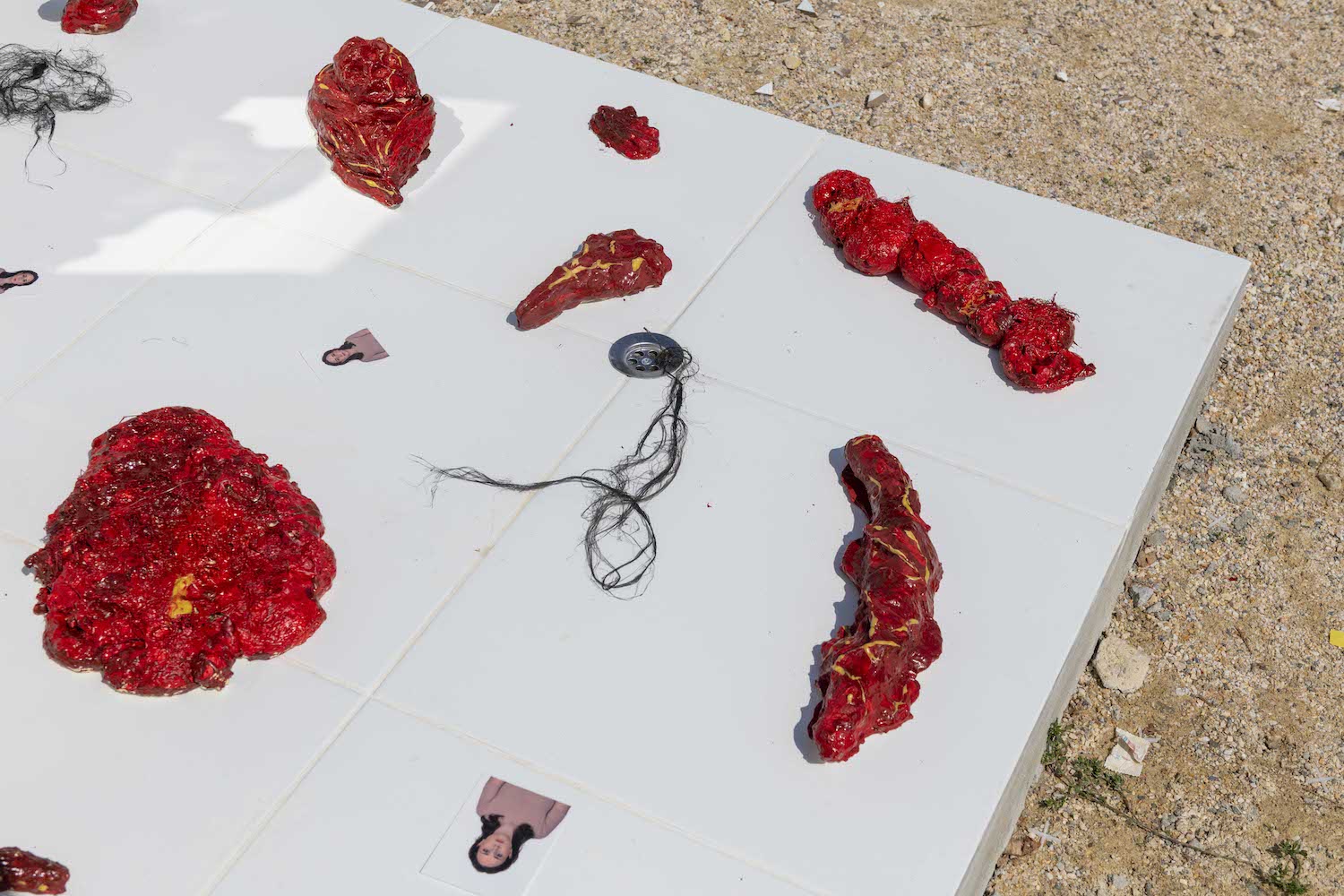 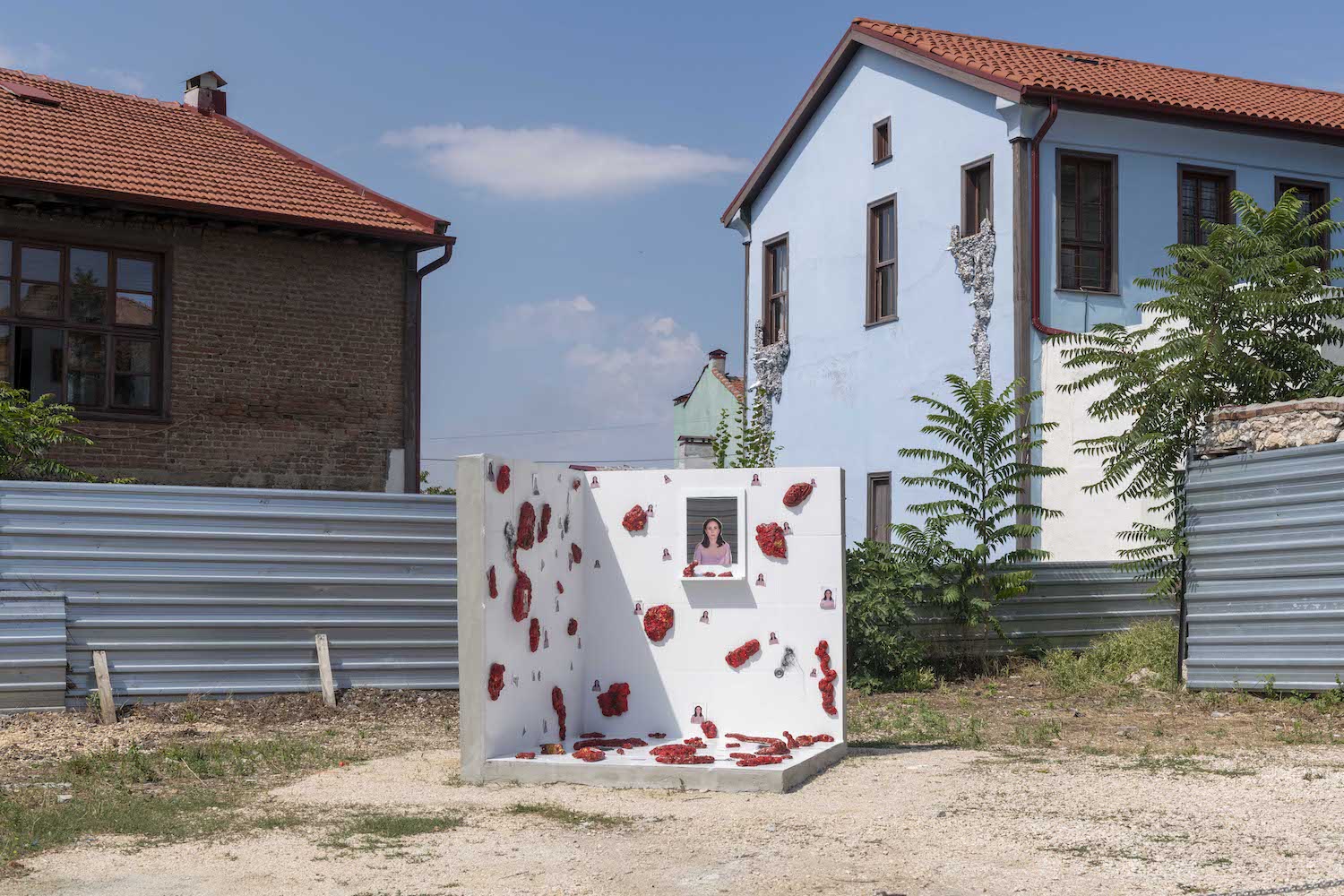 The Budapest Hub held an award ceremony, exhibition and concert as the final event of their project RECULTURALISM.
COLLABORATION OF Budapest Hub
Exhibition

are projects hosted two artists and held several side events during the production and exhibition of their artworks.
COLLABORATION OF Antalya Hub