A beehive within Kypseli*

Some persistent artists and a French bookstore owner

I am strolling down the archetypically Athenian Kypseli neighbourhood. It’s been a while since the last time, I find it has changed. Once upon a time glamorous, Kypseli has become densely built. Now home to many migrants, it embraces its multiculturalism and creates a new Athenian perspective. There is no surprise that the artists I am going to meet chose this neighbourhood for their “headquarters”. Kypseli might be also serving as a good paradigm for their new project, “Concrete Contract”, an artistic research in the context of VAHA on concrete, on how it influences human and natural environment.

VAHA, which means “oasis” in Turkish, is a programme made with and for the empowered voices of independent arts and culture spaces, advocating for public discussion and dialogue in cities across Turkey, Europe, and neighbouring countries.

One of 16 VAHA hubs is the Kypseli Hub, consisting of the artistic group Noucmas and the bookstore O Meteoritis. 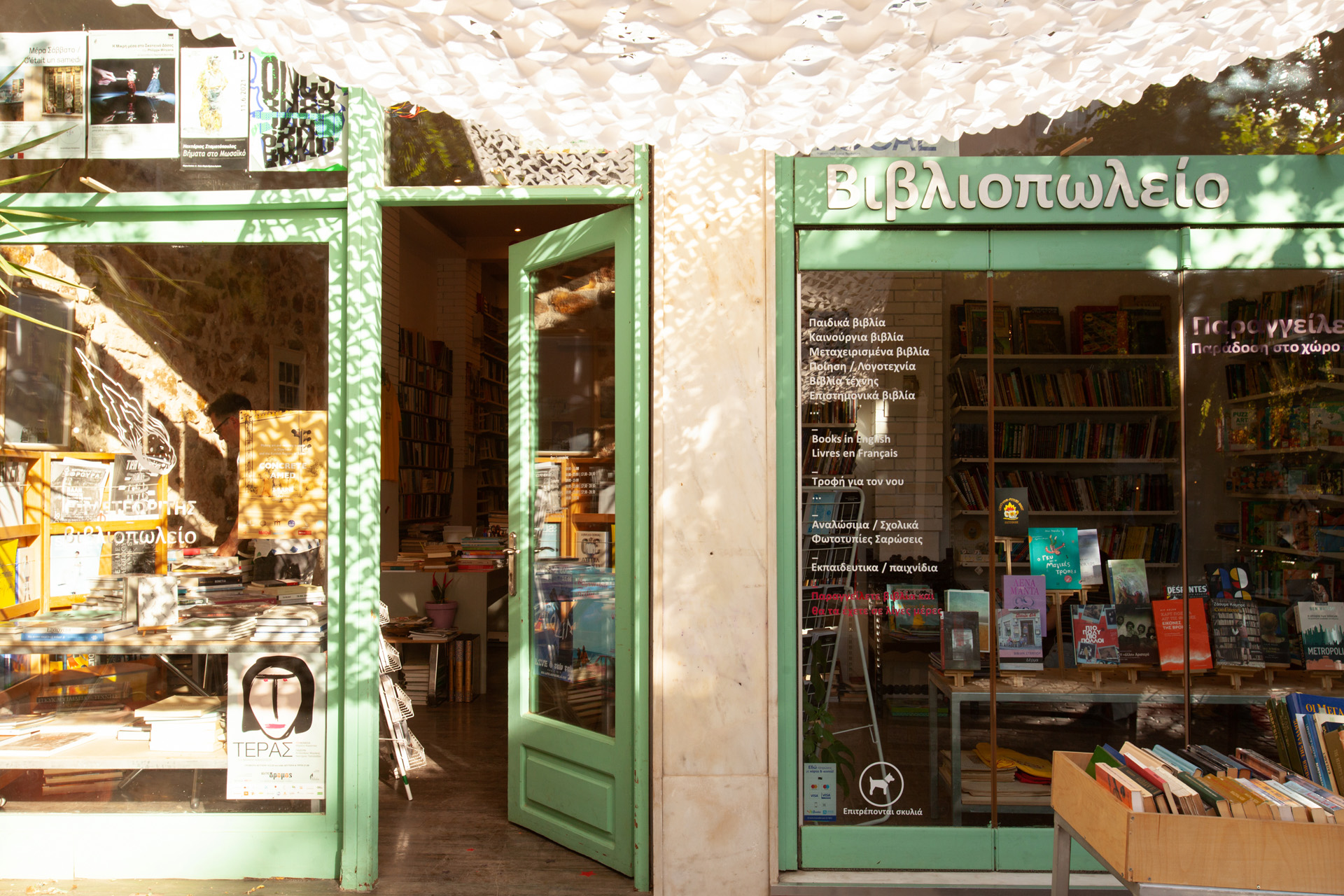 Kypseli’s legendary pedestrian street, Fokionos Negri, is where I meet with the owner of O Meteoritis, Benoît Durandin. He says he doesn’t know why he has ended up in Athens, but he would eventually find out someday. He sees his bookstore as an onion, with multiple layers, a box with which he can understand the world. VAHA is important to him, as it contributes towards fulfilling his desire to always learn something new. “In VAHA we are trying to make maps, together with Diyarbakır and Tirana, to see where we are going,” he says, “what the problems are.”

You can find all kinds of books in O Meteoritis, new and old, including collectors’ items, in Greek and in many other languages, amazing children’s books. Plus, the place often hosts cultural events. O Meteoritis is not simply a bookstore, it’s a lively cultural cell of the neighbourhood. 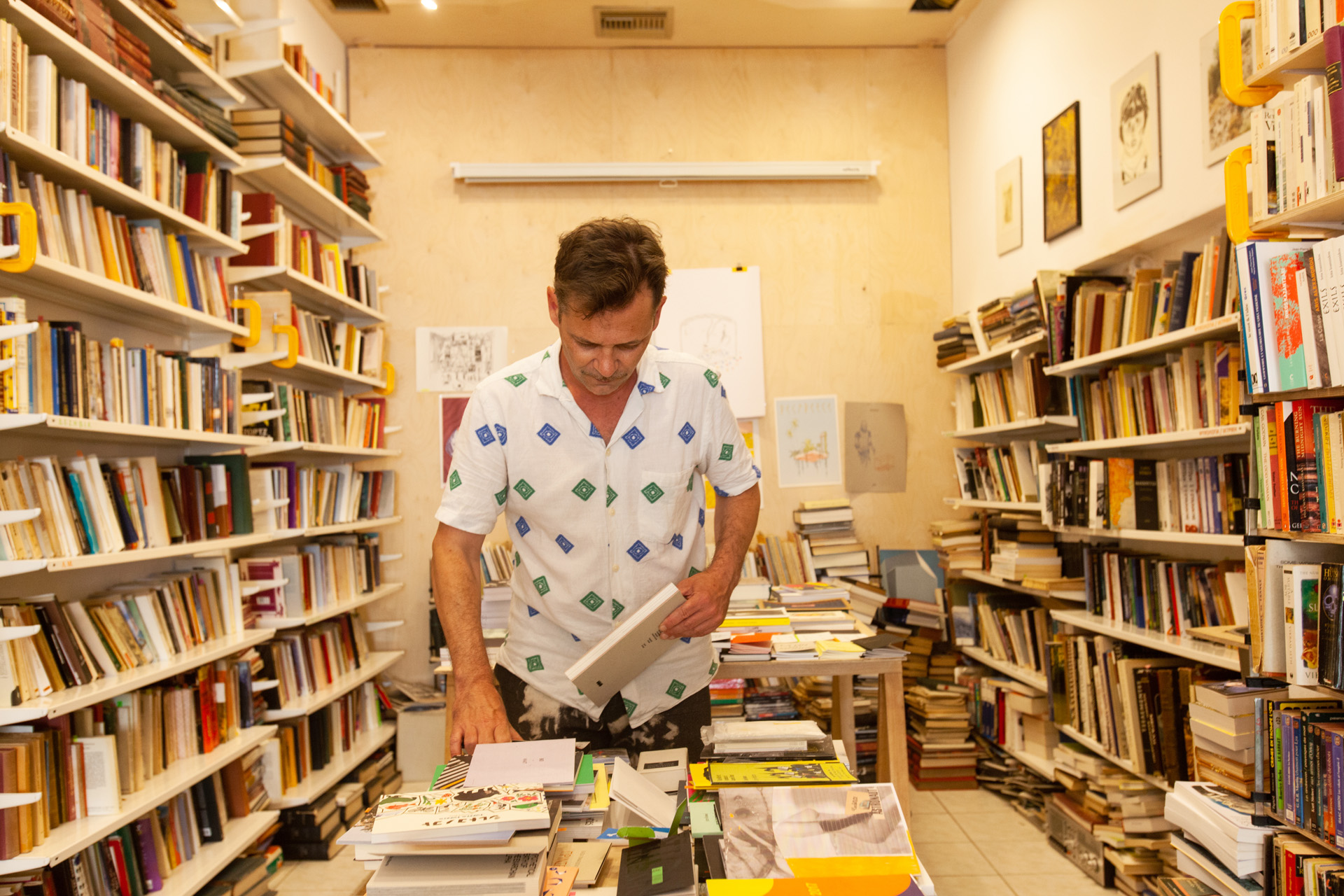 Meanwhile, Noucmas team arrives. It consists of a French man, Vincent Meyrignac, and “reverse migrants” Olga Souri, Katerina Harou (all co-founders), and Katerina Samara - Greeks who had migrated to London, Paris and Switzerland and now returned.

They say they are also struggling here to survive and to be heard. But because there is no institutional support for independent artists, they enjoy ample freedom. They emphasise museums and galleries in Greece are not interested in opening a communication channel with small, independent art spaces like theirs. They furthermore describe how the Greek state is not aware of the contemporary art scene in the country – it’s only the ancient civilisation they care to sustain and promote, they say. 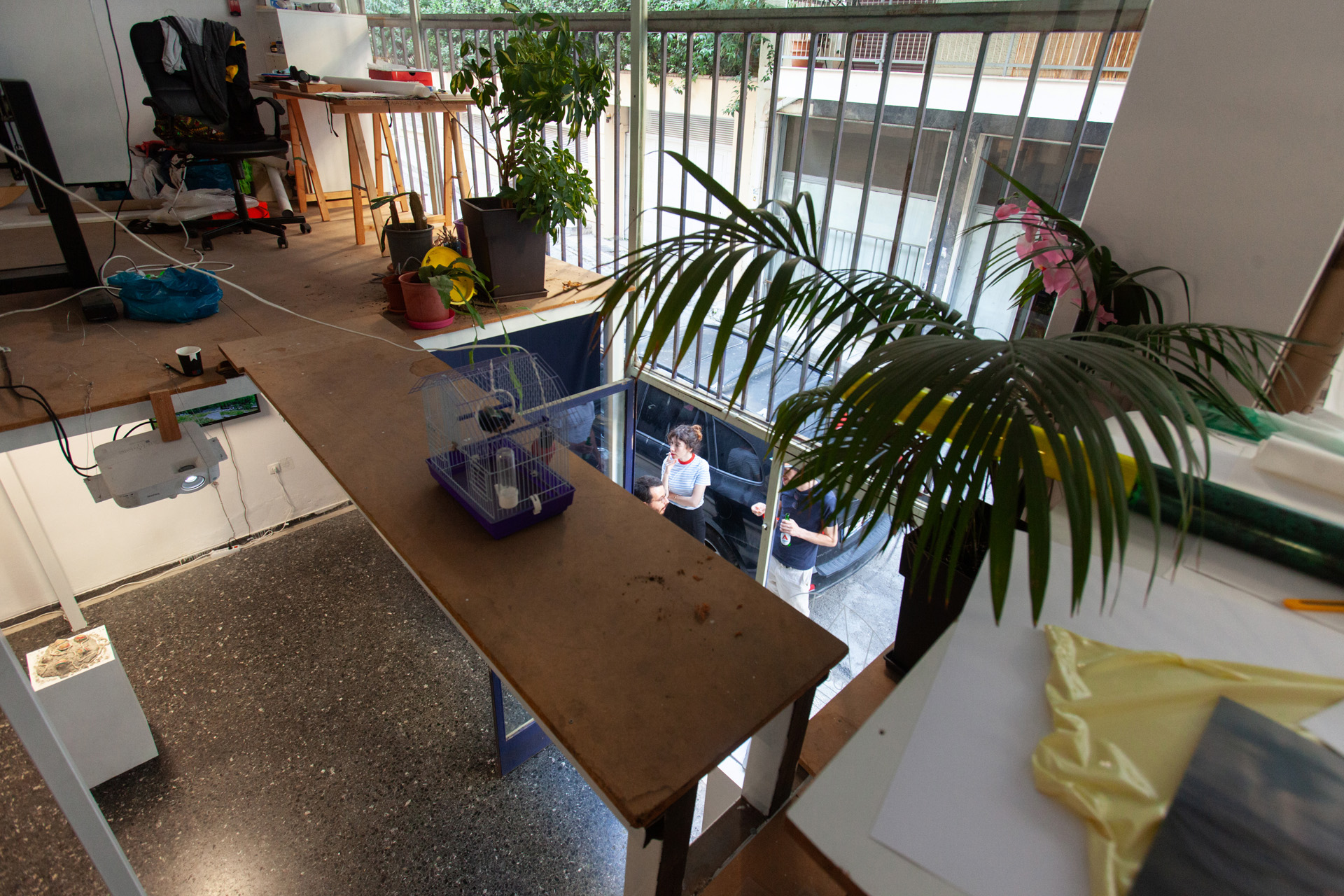 Noucmas space is an old saw mill they renovated themselves. They chose Kypseli because of its perpetual motion and multiple facets. Their ground floor regularly hosts exhibitions and seminars. In the basement, they host French musician Andrew Bunsell, as part of the team.

Their first exhibition happened in April 2019. Plus, from day one their doors were open to the neighbourhood - for example, they had been hosting art seminars for children. Until today, they have worked on artistic projects along with local artists and artists from abroad, being “international” from the very beginning.

Then, the pandemic struck. It proved a catalyst for them to start contemplating on the concept of the “neighbourhood,” both for engaging the people of Kypseli, and, in a wider sense, of strengthening bonds with neighbouring countries’ artists. It was then the cooperation with VAHA began and enhanced building connections with people from Turkey, the Balkans and European countries. 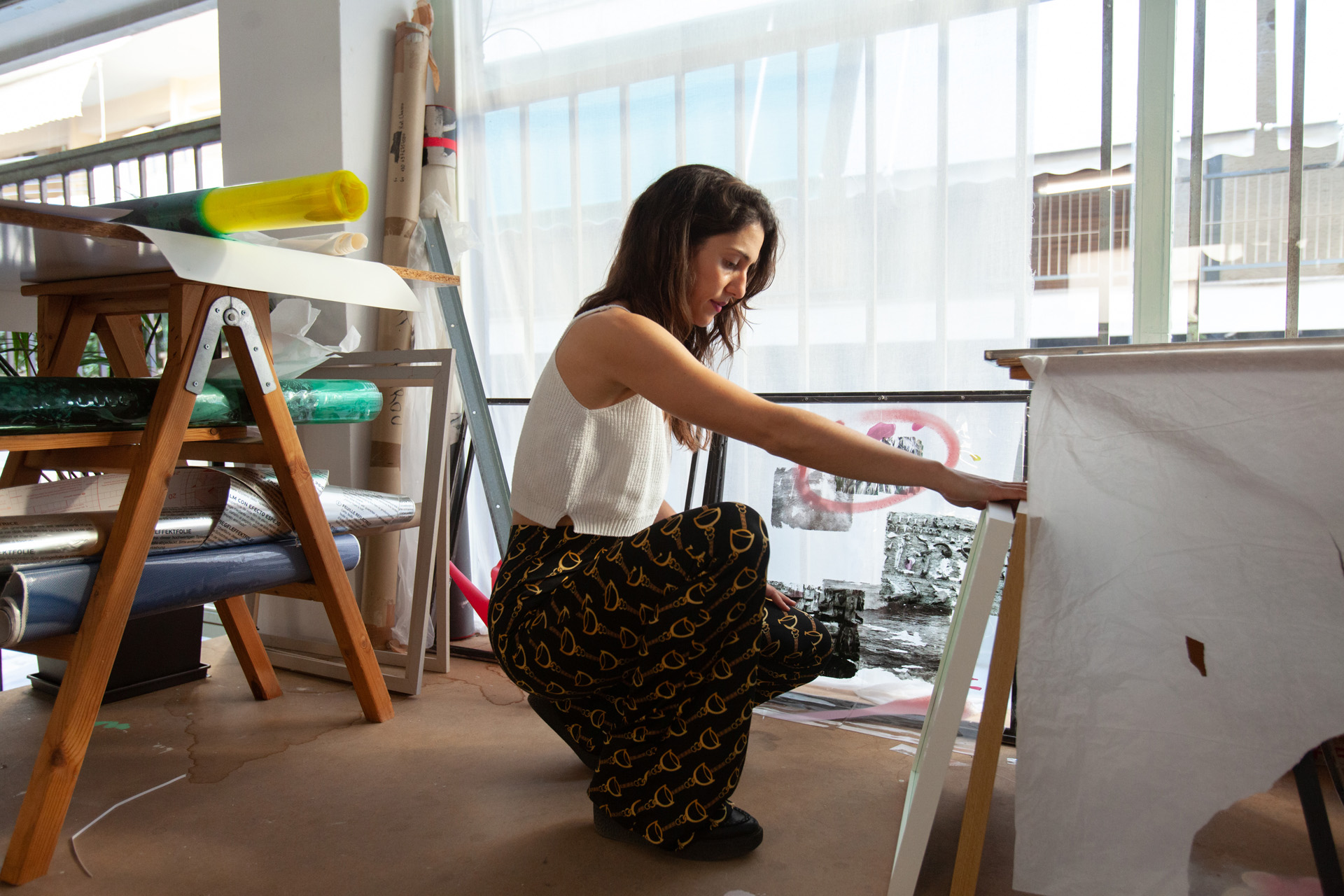 They emphasise that despite Greece being part of the Balkans, it doesn’t maintain strong bonds with Balkan countries. Since Noucmas has started building on such relations, it has been very creative and proved they have so much in common. They have started by themselves reaching out, by organising an exhibition in Belgrade, and then VAHA enhanced their activity and significantly broadened their perspective, showing them it can be easier to build cultural bridges than they thought.

They then explain how they began the Concrete Contract project with a Zoom meeting among Athens, Tirana and Diyarbakır hubs. They found common traits in the policies of concrete in their countries.

In Diyarbakır concrete is about erasing cultural memory and history. Vincent and Benoît describe their experiences when they visited the city in the context of VAHA. They say that although the 2016 conflict between Kurdish rebels and Turkish armed forces has left behind a quite harsh environment and the city was rebuilt erasing memory, the artistic scene in the city is very active and creative. And this has been a big inspiration for them: how to make art in a crisis. 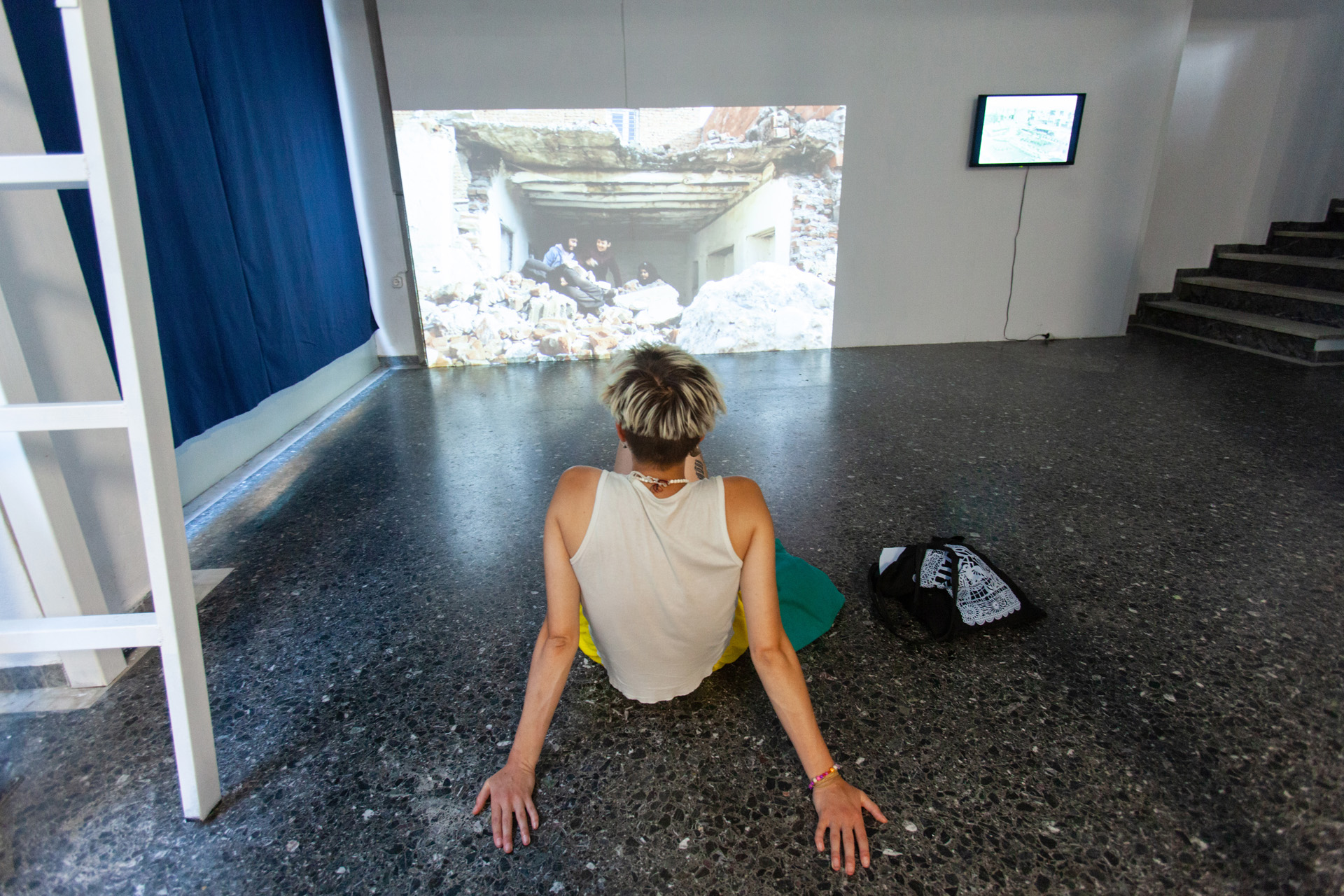 Then Arnen Sula from Albanian organisation Tek Bunkeri says that in Tirana concrete is about big development projects which occupy free public space and asks the question of how much dirty money is laundered per year to build these skyscrapers.

Two artists, from Tirana and Diyarbakır, converge that art should develop an activism aspect to be progressive and free.

In the week of 2-9 June 2022, Kypseli Hub hosted their colleagues from Diyarbakır in a series of events called “Concrete Amed” (Amed being the Kurdish name for Diyarbakır). A Diyarbakır artist says that for Amed, from the very beginning, all their thoughts were around the idea of reclaiming the collective spaces which are the vast archeological grounds of political struggles for the Kurdish identity and culture. For them, the project was mainly about how they couldn’t or weren’t able to relate to the country but still have the will and power to reclaim their living spaces and cities. 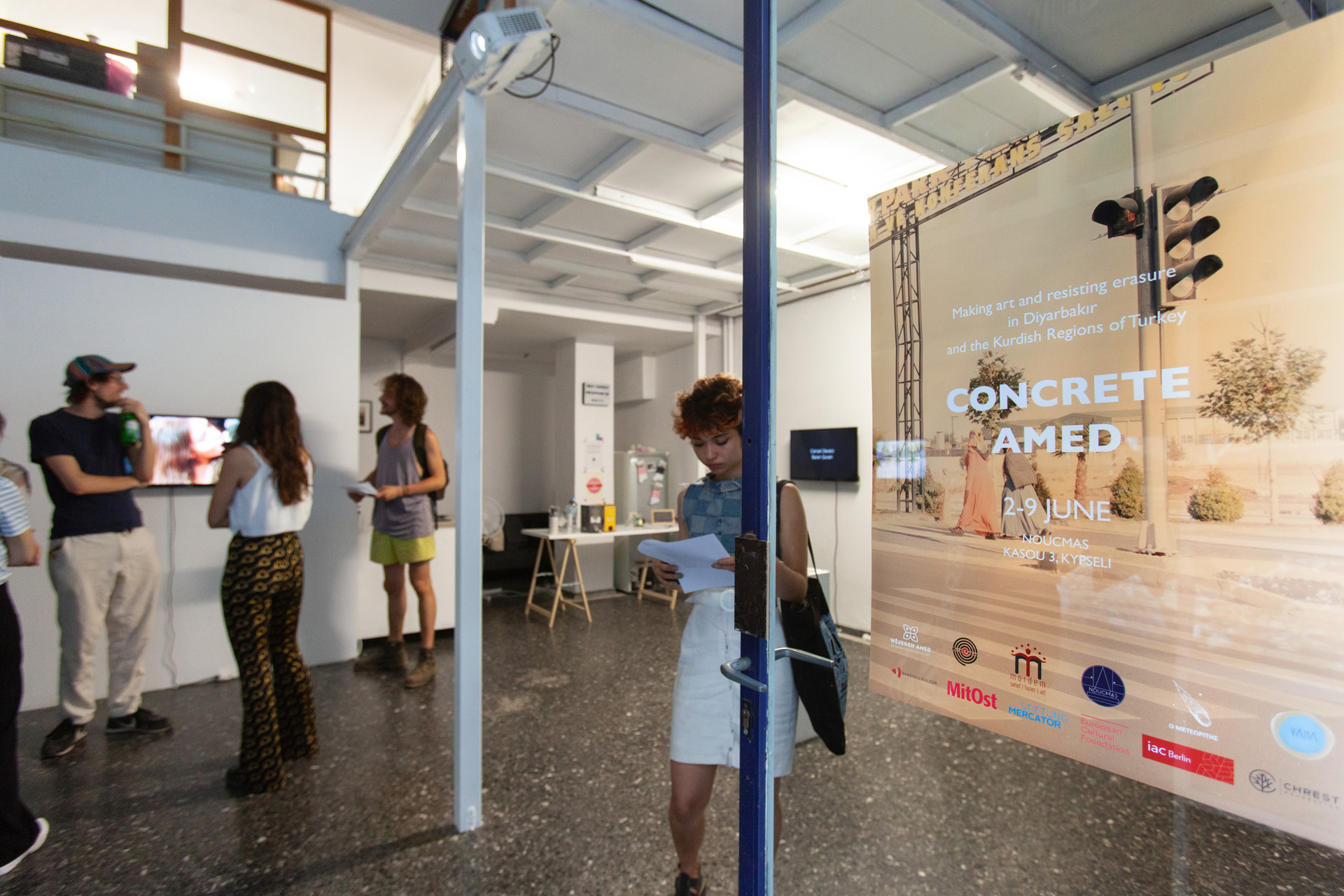 As to Athens, Noucmas says that the policy of concrete has to do with what happened in Acropolis (referring to the controversial newly built cement path) as well as to what happened in the 50s, with the massive construction of concrete blocks of flats and the burying of rivers. In short, in Athens, the project would focus on how concrete has covered the natural element, and how this affects our lives.

They would like to turn the small street on which their hub is based into a pedestrian one. They would also like to unearth the river that is flowing underneath the biggest pedestrian street in Athens, Fokionos Negri - also in Kypseli.

Meanwhile, they continue with their other projects, such as their successful exhibition Womanhoods, and teaching art to children with psychosocial difficulties.

They unveil how they became to be named Noucmas. They were playing a game writing down words, when Olga said to Vincent “Vincent, I can’t spell.” And Vincent replied, “None of us can spell, we are artists”. So they named it: None Of Us Can MAgic Spell. – NOUCMAS.”

In any case, this world is in urgent need of an anagram of its mainstream narrative if it is to be saved.

You can read a longer version of this article in Greek on Popaganda.

This journalistic portrait is commissioned by “VAHA: Building Common Ground for Spaces of Public Discussion and Dialogue”. VAHA is an initiative of Anadolu Kültür and MitOst e.V., funded by Stiftung Mercator and the European Cultural Foundation. VAHA partner consortium is in a collaboration with the iac Berlin to implement a series of ‘thematic workshops and network meetings’. We thank the Chrest Foundation for its support of travel related expenses.
Share: